I’m Carly, a 31 year old American girl, although at this point I consider myself a world citizen as I have spent the better part of the last 10 years living outside of the United States. I was born and raised in the suburbs of Chicago, Illinois. When I was 18 years old and desperate for a serious change of scenery, I left Chicago and made my first big move across the country to Bozeman, Montana. I attended college there for 5 years. During that time, I studied abroad for one year in Murcia, Spain to learn Spanish. I fell in love with Spain and promised myself I would return as soon as I graduated. I kept my word and after graduating in 2010 with a double degree in English and Spanish Languages, I went back to Spain and worked for 3 years as an English Teacher in Granada, Andalucia. During this time I was able to travel extensively throughout Europe.

My “other” home: Bozeman, Montana

My “other” home: Bozeman, Montana 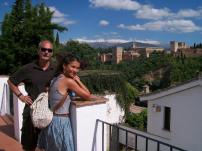 My “other, other” home: Granada, Spain

I often question why I ever left Spain, but the travel bug was biting hard and I decided to change hemispheres and moved to Melbourne, Australia, where I lived for one year on an Australian “Working Holiday Visa”. After several failed attempts at moving back home to start a “normal” life, it was clear that my wanderlust was a permanent condition and I was going to have to find some kind of job that would work with my traveling lifestyle. Finally, I found my dream job teaching English online and my “calling” as a digital nomad and have been traveling while working ever since, in Europe, the USA, Southeast Asia, South America, and recently, Africa.

While this blog was initially intended to be a travel blog, it’s purpose to relay my experiences and advice to other backpackers and those traveling on a shoestring, I am beginning to shift gears in my life and my blog will reflect that. After traveling for so long for the thrills and fun, I have found myself with a desire to get something more out of traveling than just personal experiences that are valuable only to me. I have been looking for ways to give back to the world which has given me so much. I now intend to use this blog to reflect the positive experiences I have out in the world where I see good things happening and humanity at it’s best.

Finally found my calling as a digital nomad. This is the life!